A roman Matron or a freeborn women in ancient Rome were citizens (cives), but could not vote or hold political office. Because of their limited public role, women are named less frequently than men by Roman historians. But while Roman women held no direct political power, those from wealthy or powerful families could and did exert influence through private negotiations. Exceptional women who left an undeniable mark on history range from the semi-legendary Lucretia and Claudia Quinta, whose stories took on mythic significance; fierce Republican-era women such as Cornelia, mother of the Gracchi, and Fulvia, who commanded an army and issued coins bearing her image; women of the Julio-Claudian dynasty, most prominently Livia, who contributed to the formation ofImperial mores; and the empress Helena, a driving force in promoting Christianity.

As is the case with male members of society, elite women and their politically significant deeds eclipse those of lower status in the historical record. Inscriptions and especially epitaphs document the names of a wide range of women throughout the Roman Empire, but often tell little else about them. Some vivid snapshots of daily life are preserved in Latin literary genres such as comedy, satire, and poetry, particularly the poems of Catullus and Ovid, which offer glimpses of women in Roman dining rooms and boudoirs, at sporting and theatrical events, shopping, putting on makeup, practicing magic, worrying about pregnancy — all, however, through male eyes. The published letters of Cicero, for instance, reveal informally how the self-proclaimed great man interacted on the domestic front with his wife Terentia and daughter Tullia, as his speeches demonstrate through disparagement the various ways Roman women could enjoy a free-spirited sexual and social life.

The one major public role reserved solely for women was in the sphere of religion: the priestly office of the Vestals. Freed of any obligation to marry or have children, the Vestals devoted themselves to the study and correct observance of rituals which were deemed necessary for the security and survival of Rome but which could not be performed by the male colleges of priests. 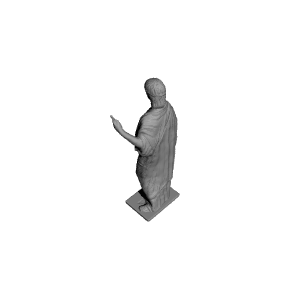