This nude young man, seated on the ground with crossed arms and legs, has beem identified as a warrior, from the presence of a sword and his short cloak. The head, with a melancholy face, is ancient and does not belong to the body:it is considered a woel of the 2nd century AD, inspired by the figure of Meleager by the greek sculptor Skopas (4th century BC).

Figures seated on the ground are unusual in Classical Greel art, but defeated soldiers and prisoners are represented in this way during the hellenistic period.

The sculpture may have originally been part of a funerary group and. if so, may have been located on one side of the entrance. to the tomb, with a matching figure on the entrance to the other side.In the Boncompagni Ludovisi Collectionthe worrior was known as a gladiator and served as pendant to the more famous Ares. The sword hilt was added to match Bernini's restoration of the Ares, inspired by the Great Ludovisi Sarcophagus. 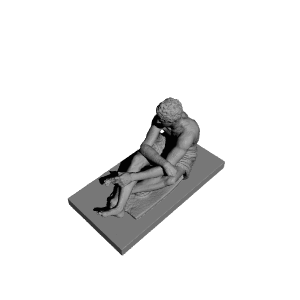