The prince holds two sacred standards. That in his left hand represents a fetish (sacred emblem) kept in Abydos and linked to Osiris. Atop the other stood figures of Osiris, Isis and Horus. Prayers on the back-pillar invoke Osiris. The text around the feet states that the statue was set up in the province of Tawer, no doubt in a temple of Abydos itself.

Khaemwaset was high-priest of Ptah in Memphis. Intrigued by its past, he refurbished many Old Kingdom monuments, including pyramid complexes and a sun temple. 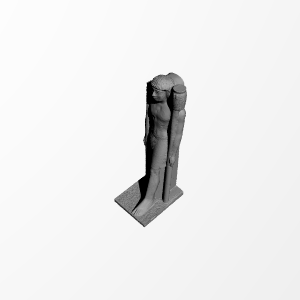