The Walking Man at The Musée Rodin, Paris

The Walking Man at The Musée Rodin, Paris

This work with a complex genesis illustrates how receptive Rodin was to the English sculptor Henry Moore’s belief that an artist should “reconsider and rethink” an idea. Also known as Saint John the Baptist or First Impression, the sculpture was conceived in 1899-1900, using studies for the torso and legs of Saint John the Baptist , dating from 1878. The original clay torso, modelled around about this time, too,was apparently rediscovered circa 1887; the legs also belonged to the early studies of Saint John. Despite the differences in the condition of these elements, Rodin assembled them in the late 1890s.

The resultant figure is marginally out of true; the torso leans forward and swivels slightly to the left. The impression of movement is heightened by the barely perceptible inaccuracy of the adjustments. The missing arms reinforce the effects sought by the artist who broke away from the hallowed academic tradition of “full figure” sculptures. The choice of a more universal title shows Rodin’s concern for expressing something essential rather than fortuitous or specific, as in Saint John the Baptist. 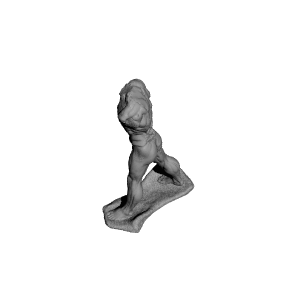