This large-sized piece is composed of a Della Robbia frame set around a marble medallion with a representation of the Virgin and Child, accompanied by two young children. The frame has a double border, being composed of a garland of fruits and flowers and a sequence of white cherubs set against a blue background. Such a design was characteristic of the first quarter of the sixteenth century, the period when Andrea Della Robbia (1435-1525) and his sons were active at the workshop.

The marble medallion is sculpted in fine low relief, with the figures being depicted in a foreshortened perspective, a feature that highlights the sculptor's wish to imitate the pictorial relief work of Donatello (1386-1466) and demonstrates his knowledge of the works of Michelangelo (1475-1564). This has led to the piece being attributed to Andrea Sansovino (1467-1529). 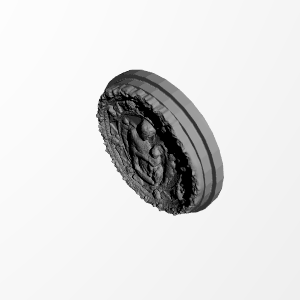