Alphonsus Josephus de Ridder, who wrote by the pseudonym Willem Elsschot, was a Belgian writer and poet. A number of his works have been translated into English.

De Ridder was born in Antwerp. He studied economics and business as he grew up, however during secondary school he had developed a love of literature.

He took multiple jobs across various European cities, such as Antwerp, Brussels, Rotterdam and Paris. During the first world war he served as a secretary for a nation food relief committee in Antwerp. After the war, he began an advertising agency, which he ran until his death.

He began writing as Elsschot in his authorial debut as a poet. He gained much of his fame for his prose however, writing works such as Villa des Roses, Lijmen, Kaas, Tsjip, and Het Been, novels with tragic and comedic elements.

De ridder died in Antwerp, 1960, receiving a national literary award posthumously. He was interred in the Antwerpen Schoonselhof

The enscription on this statue reads: "Yet all of us are flesh and blood of some sort. and that the rain wipes away all of us, they too see and did well" when translated to English. 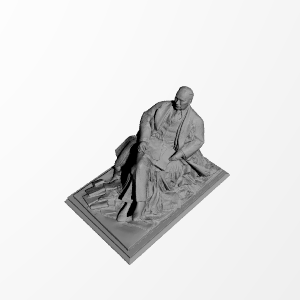