A statue of William Shakespeare, sculpted by Giovanni Fontana after an original by Peter Scheemakers, has formed the centrepiece of Leicester Square Gardens, London, since 1874. The marble figure, copied from Scheemakers' 18th-century monument to Shakespeare in Poets' Corner, Westminster Abbey, stands on a pedestal flanked by dolphins at the centre of a fountain. It is the result of improvements to the gardens made by the financier Albert Grant, who bought the Square in 1874 and had it refurbished to a design by James Knowles.

The scroll held by Shakespeare is inscribed with a quotation from Twelfth Night (Act IV, Scene II), THERE IS NO DARKNESS BUT IGNORANCE, where the original in Poets' Corner has a misquoted passage from The Tempest. The Leicester Square statue also differs from its model in omitting reliefs of Henry V, Richard III and Elizabeth I, from the plinth on which Shakespeare rests. 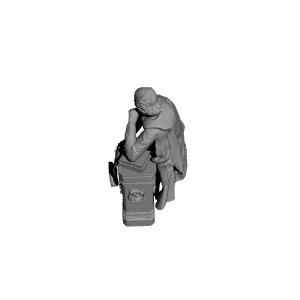 We printed this one on the Library's PolyPrinter 229.