3D
360°
Scan The World
2,671 views 404 downloads
1 collection
Community Prints Add your picture
Be the first to share a picture of this printed object
0 comments

This vigorous model of a bull standing with head raised and bellowing is known in several versions. The example in the Bayerisches Nationalmuseum, Munich (inv. R 3232), cast with integral footplates and with traces of gliding, is likely the primary version. An almost equallity fine example deaccessioned by the same museum in 1923, also with footplaces and traces of gilding, is now in the Rijksmuseum (inv. BK-16944). Frits Scholten (op. cit., 2005) agrees with Weihrauch (op. cit.. 1967) in placing the model within the circle of Peter Paul Rubens and, building on a supposition by Theuerkauff (Krahn. op. cit.), ventures further to attribute it to the Antwerp sculptor Artus Quellinus the Elder circa 1640.

A gilt example of the model, paired with a facing gilt model of a walking horse, appears on the table in the center background in the Antwerp kunstkammer painting known as “The Studio of Rubens,” owned by Ferdinand III, Grand Duke of Tuscany, and attributed to Cornelis van Baellieur, now in the in the Palazzo Pitti, Florence. The paired gilt model of the horse in this painting closely resembles the autograph terracotta model by Quellinus, signed and dated 1638 (sold Christie’s New York, January 10, 1990, lot 196).

A cast similar to the present example, also referenced by Weihrauch (op. cit., 1956) and formerly in the Camillo Castiglioni collection, Vienna, was bequeathed to the Fitzwilliam Museum, Cambridge, acc. no. M.3-1997 (dated to 1650 by thermoluminescence test on its core). Another similar cast was formerly in the collection of Nelson Rockefeller, New York. 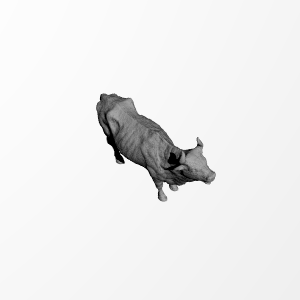 ×
1 collections where you can find Bellowing Bull Da Janim