3D
Scan The World
3,791 views 168 downloads
Community Prints Add your picture
Be the first to share a picture of this printed object
0 comments

This marble portrait bust of a young man is Roman, originating from the Antonine period, A.D. 161-180. This dazzling bust of a young man with a luxuriant head of curls and an expanse of chest that evokes Classical bronze sculpture of the fifth century B.C. was created in Athens during the mid-second century A.D. to memorialize a beautiful youth by identifying his image with those of ancient Greek mythological heroes. In the Antonine period, elaborate coiffures such as this one were fashionable among the jeunesse dorée (translated as guilded youth). The two portraits of the emperor Lucius Verus, both at the MET and on the archive of Scan The World, demostrate the deeply drilled carving style that was developed in Rome to convey the light and dark effects within such curls. Greek sculptors sought a more plastic rendering; each lock on this head varies and ends with an individualized snail-like curl. Not only fashionable, the full head of hair, the sharp turn of the head, nude chest, casually draped cloak, and ribbon-like sword belt all evoked associations with images of the Homeric heroes and the glorious past of Classical Greece. The mid-second century A.D. was a period in which the Greeks attempted to bring new life to their ancient cultural traditions. The fusion of contemporary and heroic in this portrait bust has created an unforgettable masterpiece. 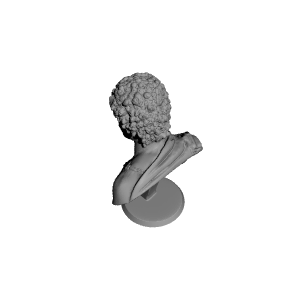