Emperor Wearing the Corona Civica at The Metropolitan Museum of Art, New York

3D
Scan The World
2,392 views 93 downloads
Community Prints Add your picture
Be the first to share a picture of this printed object
0 comments

Emperor Wearing the Corona Civica at The Metropolitan Museum of Art, New York

This resolute figure wears the corona civica, a wreath of oak leaves. Originally a modest award to soldiers who had rescued a comrade in battle, an honorary oak wreath was given to the emperor Augustus early in his reign, and it soon became an insignia of power, an imperial prerogative maintained by all his successors, down to the end of the Roman Emperor. This imperial head has been recarved from an earlier portrait, probably that of the Julio-Claudian emperor Caligula. Remnants of the original coiffure can be seen behind the ears. Such reuse of marble statues was quite common in the third century A.D. 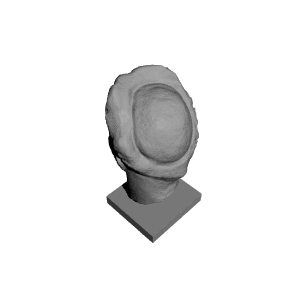