3D
Scan The World
4,729 views 237 downloads
Community Prints Add your picture
Be the first to share a picture of this printed object
0 comments

udō Myōō is the most widely represented in Japan of the Esoteric Buddhist deities known as Myōō, or Kings of Brightness. A fierce protector of the Buddhist Law, he is considered to be a direct emanation of the Buddha Dainichi Nyorai, the principal Buddha of Esoteric Buddhism. The first sculptures of Fudō made in Japan were seated, but standing sculptures like this one were carved beginning in the eleventh century. Images of Fudō Myōō are often housed in temple halls called Gomadō where a fire-burning ritual called the goma-e is performed. The ritual involves the burning of incense, talismans, and other possessions to symbolically destroy defilements. This statue, originally comprised in six hollowed-out pieces of wood, was formerly the central icon of the Kuhonji Gomadō in Funasaka, twenty miles northwest of Kyoto. The hall has not survived.

An early eighth-century commentary on the Buddhist scripture, the Dainichi Sutra, is the basis for the iconography of many images of Fudō: “His figure is like a child. In his right hand he holds the great sword of wisdom and in his left hand he holds the lasso. On the head there is a pile of hair and hair hangs down his left shoulder. The left eye is slightly closed and the lower teeth bite the upper lip at the right side. The lower left lip protrudes. On the forehead are grooves like waves. He sits on a rock. He looks humble and fat. He is extremely angry.” Emphasizing his role as an unflagging, fierce defender of Buddhism, Fudō uses his sword to cut through ignorance and his lasso to reign in those who would block the path to enlightenment.

In keeping with the symbolic color schemes characteristic of Esoteric Buddhist art, Fudō’s hair was once painted red and his flesh blue-green. Traces of these colors, as well as designs on the roundels decorating his garments, remain visible today. Now missing, Fudō would once have had a mandorla carved in the shape of wild flames and inserted behind him into the rock upon which he stands. The heavy weight of the shoulders and back is planted firmly on the stiffened legs, appropriate for a deity whose name means the “Immovable.” 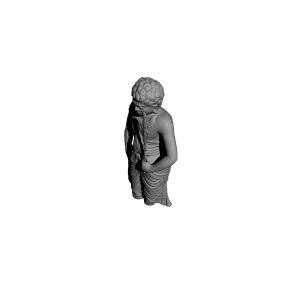