3D
360°
Featured Scan The World
1,991 views 257 downloads
2 collections
Community Prints Add your picture
Be the first to share a picture of this printed object
0 comments

In this beloved marble view
Above the works and thoughts of Man
What Nature could but would not, do,
And Beauty and Canova can!
Beyond Imagination’s power
Beyond the Bard’s defeated art,
With Immortality her dower,
Behold the Helen of the heart.

Canova’s cool, cerebral compositions, combined with his dazzling technical skills as a carver, made him the most celebrated sculptor of the 19th century. The effect of his sculptures, which were almost always pure white, immediately evokes ideal images of Ancient Greece and Rome. The late 18th and early 19th century was a time of extreme turbulence and political and social chaos. Ruling dynasty’s and empires vanished and new ones appeared, as if overnight, and yet these calm and controlled gods and goddesses, warriors and heroines of the Ancient world, remain above the fray and must have been aesthetically calming to collectors and looking to the past for reassurance.

Canova was searching for ideal beauty – something we see again and again in his sculpture, especially his busts – and in Paris and Helen he achieved it. They remain as perfectly beautiful today as they were when they were created in 1812.

One of two sculptures depicting Paris and Helen. Model by Antonio Canova (1757-1822) and cast by Vincenzo Malpieri, Paris. 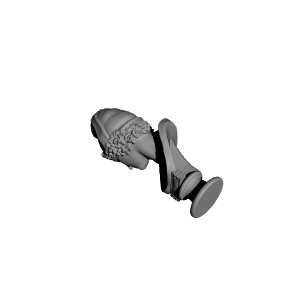