3D
Scan The World
4,644 views 275 downloads
4 collections
Community Prints Add your picture
Be the first to share a picture of this printed object
0 comments

This is a bronze portrait of Alexander the Great (filled, the original sculpture is hollow) either Greek or Roman and created in the Late Hellenistic to Hadrianic period, ca. 150 B.C.-A.D. 138.

Alexander The Great cultivated a visual image that projected his forceful character and leadership. Since there are no surviving fourth-century B.C. portraits attributed to his official court sculptor, Lysippos, later sculptures such as this monumental bronze provide an idea of his appearance. His portrait became the most famous in history and has been emulated by countless leaders from Hellenistic times to the present.

Divine cult centered around Alexander the Great arose during his lifetime and continued after his death in 323 B.C. He was worshipped in Greek cities, frequently in association with his successors, the Hellenistic kings who divided and rules the vast kingdom he had created. The cult of Alexander continued during Roman times particularly in Macedonia, his homeland, and in Asia Minor, where cities traced their foundations to his rule. This posthumous portrait, with long "leonine" hair recalling Alexander's divine association with the hero Herakles, was probably from a cult statue. 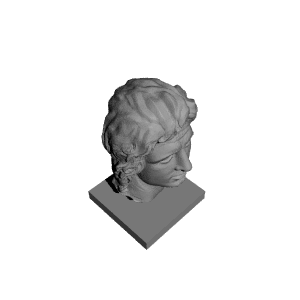