Portrait of Matidia Minor at The Metropolitan Museum of Art, New York

3D
Scan The World
2,793 views 149 downloads
Community Prints Add your picture
Be the first to share a picture of this printed object
0 comments

Portrait of Matidia Minor at The Metropolitan Museum of Art, New York

This head belonged to an honorary portrait statue of Mindia Matidia, or Matidia Minor (A.D. 85-162), half sister of Sabina (Emperor Hadrian's wife) and aunt of Emperor Antoninus Pius. Five other replicas of this portrait type exist, recognized by a statue of Matidia Minor recently discovered in the Roman theatre at the Campanian town of Suessa Aurunca, where she was a major benefactor. As is common with the imperial family, she is shown with an idealized, youthful face and a complex coiffure with a braided hairpiece. Her upward gaze is characteristic of portraits from the Antonine period onward. 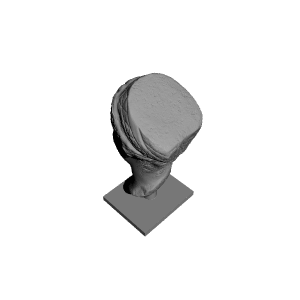