This intricately detailed high-relief depicts the presentation in the temple and flight into egypt, biblical events described in the Gospel of Matthew. The original artwork, carved by Nicola Pisano (born 1220/1225 - died 1278/1287), decorates the pulpit of the Cathedral of St Mary of the Assumption, Sienna (UNESCO World Heritage List, 1995) in Tuscany.

Soon after the visit by the Magi, who had learned that King Herod intended to kill the infants of that area, an angel appeared to Joseph in a dream to tell him to flee to Egypt with Mary and infant son Jesus. The episode is frequently shown in art, as the ginal episode in the Nativity of Jesus, and was a common component in cycles of the Life of the Virgin as well as the Life of Christ. Within the narrative tradition, iconic representation of the "Rest on the Flight into Egypt" developed after the 14th Century. 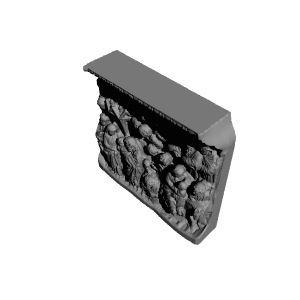 Absolutely beautiful. Printed in SunLu Wood with a slight decrease in Z height. Thank you.