The story of Cupid and Psyche was a popular artistic choice in the neoclassical period. Canova produced many versions of the theme; most were of terracotta, but he also sculpted some beautiful marble groups, two of which are in the Louvre: Cupid and Psyche standing, and Psyche Revived by Cupid's Kiss.

The figures of Cupid and Psyche are standing, Cupid completely naked, Psyche modestly draped, he with his arm around her shoulders. She raises his left hand with her own, to place a butterfly on his palm. The butterfly symbolizes her soul, which she offers in all innocence to Cupid. The wandering of the soul was a concept of the Neo-platonic philosophy to which Canova adhered. The love between the two characters is represented simply, somewhat naively, by their contemplation of the butterfly.

The group stands on a high cylindrical pedestal decorated with garlands of flowers and a butterfly. The upper part of the base could be turned by a handle that can still be seen today, but is now blocked for the protection of the sculpture.

Antonio Canova, a sculptor from Possagno, was only thirty years old when this sculpture was commissioned by a Scottish colonel, Sir John Campbell, whom he met in Naples in 1787 and who also commissioned the famous group known as Psyche Revived by Cupid’s Kiss (now in the Louvre). These two sculpted groups were admired by many artists who visited Canova's studio in Rome. Due to the difficulties of transporting them to England, the groups remained in Canova's studio until French troops occupied Rome in 1798, when General Murat bought them for his château at Villiers-la-Garenne near Neuilly. During his first trip to Paris in 1802, Canova is known to have visited his two masterpieces in their new home. The two groups later entered the imperial collections before being acquired by the Musée du Louvre.

Canova made a second marble group from a plaster model of the sculpture in the Louvre; this second work is now in the Hermitage Museum in St Petersburg, having been acquired by Czar Alexander I in 1815 as part of the collection of Napoleon’s first wife, Josephine.

Other examples of Canova’s work—Daedalus and Icarus, Venus and Adonis, Mars and Venus, Hector and Ajax—also reflect his skill in designing sculptures of two standing figures, a difficult artistic feat. Canova found simple iconographic solutions for this group, in which nothing is rigid or static. He transcended the ancient model of Cupid and Psyche in the Capitoline Museum to create a genuine duality, a true complicity between the characters. Each depends on the other. The interplay of gazes, the interconnected gestures, the two heads close together, the group of three hands, the gracefully linked bodies… everything is designed to create a single sculpture rather than two individual figures.

This group of Cupid and Psyche standing is one of Canova’s finest works; it inspired many other artists and was widely copied throughout the 19th century.

It is complex model, it should be printed big enough otherwise while it is cleaning, there will be some difficulties and risk to brake model. Enjoy your print. 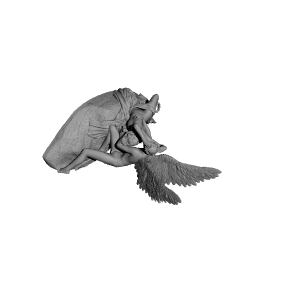 Printed in 2 parts to better manage the support.

Printed on Phrozen Sonic Mighty 4k on Aqua 4k Grey, primed and painted in an off white rattle can.