3D
Scan The World
1,252 views 77 downloads
Community Prints Add your picture
Be the first to share a picture of this printed object
0 comments

This is a Roman replica of a large bronze statue made in the second half of the 5th century BC. It's derived from the colossal statue of Athena, which stood in inside the Parthenon in Athens. The missing bronze original has often been attributed to the Greek sculptor Crésilas, a disciple of the famous Phidias.
This small replica is missing its head, its arms and its lower part. It depicts Athena, the daughter of Métis and Zeus. She is the goddess of reason, the intelligence that guides the physical strength of heroes. She is the protector of Athens, but also cities in general. 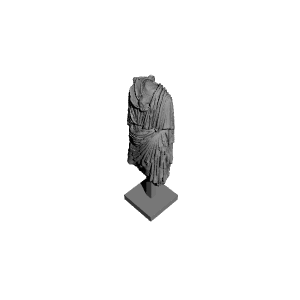