3D
Scan The World
1,466 views 99 downloads
Community Prints Add your picture
Be the first to share a picture of this printed object
0 comments

Chandesha or Canda or Chandeshwara Sharma is one of the 63 Nayanmars. Processional bronze images of him generally show him as a boy, with entwined locks of hair, standing with his hands in Añjali Mudrāand with an axe in the crook of his arm. In the Shaiva temples of South India, his shrine is positioned within the first enclosure wall of the temple complex and to the North East of the lingam. He is there typically shown seated, with one leg dangling downwards, a hand on one thigh and an axe clasped in the other. He faces inwards towards the main temple wall. He is depicted as deeply lost in meditation, and devotees snap their fingers or clap their hands to attract his attention. Another explanation, since he is considered to be the guardian of the temple belongings, is that devotees clap their hands to show that they are leaving the temple empty-handed. It is also customary to leave even the sacred ash inside the temple itself. His original role was probably that of the recipient of nirmālya, that is to say of offerings of food and garlands that had originally been offered to Shiva. 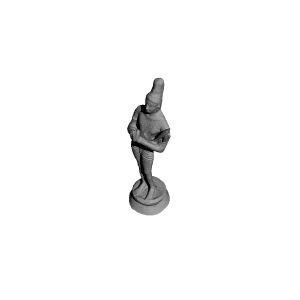