3D
Scan The World
3,723 views 170 downloads
Community Prints Add your picture
Be the first to share a picture of this printed object
0 comments

This is an Etruscan, carved in the late 4th early 3rd cenutry B.C., terracotta statue of a young woman. The legendary king Aeneas, father of the Latin race, fled from Troy to Macedonia, then Siciliy, and finally to the Italian peninsula. There he founded a city called Lavinium (modern Pratica di Mare), a site eighteen miles south of Rome, which became a major religious centre for the Latin people. The distinctive clothing and jewellery on this life-sized statue closely resemble those on fourth and third century B.C. terracottas found there. The elaborate necklaces and armband appear to be reproduced from molds of actual jewellery. Some of the pendants are decorated with reliefs depicting various Etruscan deities and heroes. Originally, this woman wear a pair of grape-cluster earrings. The one on her left ear is visible behind her long hair. When complete, the statue probably took in a sanctuary and showed the young woman holding an incense box in her extended right hand. This rare statue is an exceptional example of the awakening sophistication of Italic artists, who over the following two centuries fused native traditions with imported ones and gave birth to the multifaceted art of Late Republican Rome. 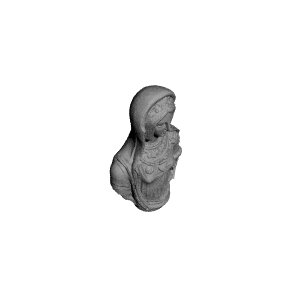