3D
Scan The World
3,047 views 371 downloads
5 collections
Community Prints Add your picture
Be the first to share a picture of this printed object
0 comments

This sculpture is called "Le Charpentier" by André Duparcq. This artist was born in Marly-lez-Valenciennes in 1897 in a family of menus where you are passionate about art. Was not his brother Abel president of the Valenciennes Society of the Cent Protecteurs des Arts? A pupil of Raset at Valenciennes, André Duparcq became, in Paris, that of Jean Boucher with whom he worked. He had a silver medal at the Salon des Artistes françaises in 1932 for a "Water carrier". His "Charpentier" earned him the gold medal in 1935. He was professor of sculpture at the School of Fine Arts of Rouen from 1935 to 1959 and was able to realize in this region several monumental works like the statues of "François 1er" In Le Havre or that of "Pierre Corneille" in Rouen.

"Le Charpentier", made of stone from Euville, strikes by its colossal pace and its clearness standing out against a background of greenery or, in winter, on the facade of the Pavillon Fournier. He proudly dominates the garden, leaning firmly on his piece of wood. Open shirt, sleeves turned up, dressed in a large trousers of big canvas, the "Charpentier" seems to defy eternity by the audacity of his right youth. This worker figure exalts the values ​​of honesty, robustness, and calm, which Duparcq had every leisure to see at work in his own family. The work of this artist shows us besides, besides the "great" imposed subjects, dealing mainly with subjects borrowed from the daily life and the modest people. The lines of this statue are sober and firm, adopting a natural meditative pace that characterizes the work of a discrete sculptor who left us in 1966. The original plaster of the "Charpentier" had been acquired by the city in 1933 for 16 500 francs on the War Damage. A sum of 16,000 francs was voted the following year to allow the realization in stone. Presented in this form at the Salon, the work was then able to join the Jardin de la Rhônelle. 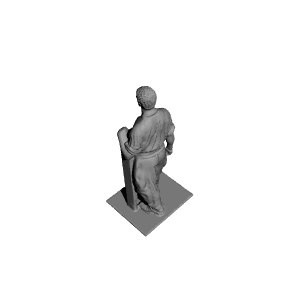