The Amazons were a tribe of independent, mighty women who had rebelled against the patriarchal society of the times and became the subject of a 5th Century BC competition between the artists Polyclitus, Phidias, Kresilas, 'Kydon' and Phradmon.

“ The most celebrated of these artists, though born at different epochs, have joined in a trial of skill in the Amazons which they have respectively made. When these statues were dedicated in the Temple of Diana at Ephesus, it was agreed, in order to ascertain which was the best, that it should be left to the judgment of the artists themselves who were then present: upon which, it was evident that that was the best, which all the artists agreed in considering as the next best to his own. Accordingly, the first rank was assigned to Polycletus, the second to Phidias, the third to Cresilas, the fourth to Cydon, and the fifth to Phradmon.”
- Pliny the Elder

The designations of the statues are grouped under the headings of the Lansdowne type, the Capitoline type, the Mattei type and the Villa Doria Pamphilj type. A fifth type was excavated at the theater of Ephesus in 1898 but didn't enter the discussion until the 1950s.

All five types show a standing female with a similar head and face, and (as with the Venus Genetrix) are clothed in a peplos that has fallen from one or both shoulders to leave her bare-breasted. The name Amazon (from 'Amazoi', Classical Greek) translates to 'without a breast', or 'not-touching men', the former notion that they removed their right breasts was so that they would not be hindered in drawing the bow, though in depictions of them this translation has been ignored.

This later version, the Amazon Sciarra type, is a 1.94 metres high copy and dates to the era of Tiberius and is derived from Polyclitus's or Kresilas's original. It was found in Rome in 1868 in the Gardens of Sallust, and is now in the Ny Carlsberg Glyptotek, Copenhagen. The figure is resting her left arm on a column and her right hand behind her head, with her face leaning to one side. Her nose, right arm from the deltoid muscle downwards, the left forearm below the elbow, both hands, and the right foot and ankle have all been restored since discovery. 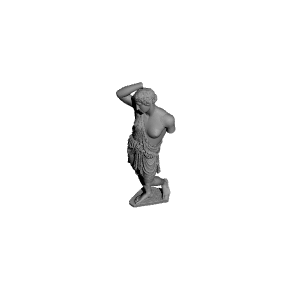 I decided to try out a sample of ruby PLA+ I purchased from Mad Maker Filament. I enlarged the model to 400mm, imported it into LuBan to chop it into smaller blocks then sliced the blocks using Ideamaker. I used a custom fine setting of 0.1 with 3 shells, default printing speed at 40mm/s with the outer wall at 30mm/s. I used supports. I set the top and bottom layers at 6. The print temperature was 200C that was lowered to 190C after the third layer. The bed temperature was 70C. It took about four days to print all the blocks. I'm still dialing in the retraction and temperature settings to deal with fine hairs over most of the blocks. I used a Creality Ender-2 printer. The filament has a deep ruby color that is difficult to photograph but has a pleasing shimmer.

Wonderful scan. Thank you for sharing