Aphrodite, goddess of love, of the "Venus Genetrix" type

Aphrodite, goddess of love, of the "Venus Genetrix" type

This statue is part of an extensive series of ancient copies based on a very famous original (now lost) from around 400 BC, attributed to the sculptor Kallimachos. Aphrodite (Venus to the Romans) holds an apple in her left hand, the prize awarded to the most beautiful goddess by Paris, a Trojan prince.

Julius Caesar is thought to have commissioned a copy in 46 BC from the sculptor Arcesilaus for the temple of Venus Genetrix (Venus the mother) in Rome. Caesar claimed to be the descendant of the goddess. 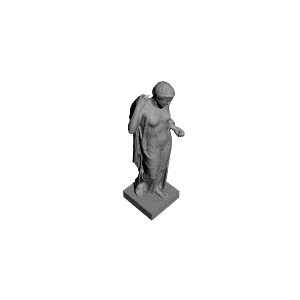 ×
1 collections where you can find Aphrodite, goddess of love, of the "Venus Genetrix" type 通过 Scan The World