Free Roman copy of the famous cult statue from the hand of Praxiteles in the sanctuary of the goddess of love in Knidos.

The Aphrodite of Knidos (or Cnidus) was a Ancient Greek sculpture of the goddess Aphrodite created by Praxiteles of Athens around the 4th century BCE. It is one of the first life-sized representations of the nude female form in Greek history, displaying an alternative idea to male heroic nudity. Praxiteles' Aphrodite is shown nude, reaching for a bath towel while covering her pubis, which, in turn leaves her breasts exposed. Up until this point, Greek sculpture had been dominated by male nude figures. The original Greek sculpture is no longer in existence, however many Roman copies survive of this influential work of art. Variants of the Venus Pudica (suggesting an action to cover the breasts) are the Venus de' Medici and the Capitoline Venus. 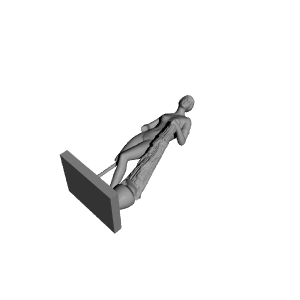