Jules Desbois started as a student of Auguste Rodin before starting his career in Paris in around 1900. He presented the Femme a l'arc (Woman with Bow) in 1905 to the salon of the National Society of Fine Arts. Very well known for the purity and cleanliness of its lines, the sculpture bought by the city of Paris for the Petit Palais museum. The original sculpture was intended to hold a bow between the subject's two arms.

This work was sculpted by Jules Desbois, born 20 December 1851 in Parçay -les- Pins and died October 2, 1935 in Paris. He was a French sculptor and engraver medalist. After passing the course in a workshop Touraine, Desbois joined the workshop of Henri Bouriché in Angers. In 1874, he studied at the Beaux Arts in Paris. He stayed for five years and perfected his technique in the workshop of Jules Cavelier, a former pupil of David d'Angers. 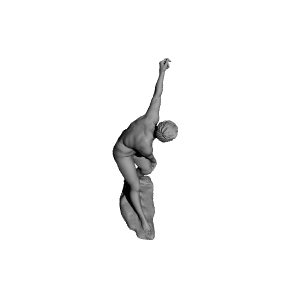