A general history of the "Prayer Rock."

In late 1924, Richard Pettigrew began searching for a sacred boulder to add to his museum. He had heard about a large rock with symbols on it called Medicine Rock, located near Gettysburg, South Dakota. Pettigrew wanted to acquire a similar rock with symbols on it to preserve and display in Sioux Falls. He sent a request to E.S. Peterson of Mobridge and J.W. Parmely of Ipswich to begin looking for a suitable piece.

A large boulder was found by Peterson with several large hand prints, but he estimated the boulder as weighing 15 to 20 tons. Pettigrew believed that it was too large to transport to Sioux Falls and requested that the search continue for a smaller boulder. Eventually, this three-ton example was found on a ranch near Evarts, South Dakota. The ranch belonged to J.J. Bentz, but was being rented by Ed Klein. Mr. Pettigrew purchased the boulder from Bentz and hired Klein to remove and transport it to the railroad station at Mobridge, where it would be shipped to Sioux Falls.

Ed Klein put together a team of six men to move the rock into town, a 17 mile trip. The first attempt to move the boulder was by using a 15-horsepower engine and leverage to pull it up, but after four hours they hadn't made much progress. Eventually, it took six men, two wagons, and eight horses to pull the boulder free from the earth and move it to the railroad station. Pettigrew paid Mr. Klein and his team $75 for their work, and an additional $75 to transport the boulder from the depot to his home once in Sioux Falls. Pettigrew placed the boulder outside his home and museum in 1925, and it has been on exhibit ever since.

In 1925, a man asked a Sioux Elder how old the carvings on this type of rock were. The reply: "My grandfather was a very old man when I was a little boy. When he was a little boy the rock was just the same (already carved)." R.F. Pettigrew correspondence, Jan 11, 1926.

Rock art has been recorded in this region since early exploration by whites. References to it appear in the journals of such explorers as Pierre de la Verendrye, Lewis and Clark, and Prince Maximilian. Because of the regions past residents, areas of North Dakota and northern South Dakota have been likelier places to discover this unique style to art. Experts do not agree as to exactly when rock art work was created, who used it, or why it was made. Further investigation and examination has found that tribes such as the Sioux, Mandan, and Hidatsa all have a history with the spiritual power of rocks.

"Prayer rocks," such as this one, are carved with images of people, animals, hoof prints, hands, and feet. Unlike pictographs where images are painted onto the surface, these shapes are characterized as petroglyphs because the images are carved into the stone. Many early recordings of prayer rocks describe them as being painted with a red ochre paint. This rock may have been painted red at one time, mixing pictographs with petroglyphs. The carvings on this boulder are of adult hands and a child's foot. The open hand was sometimes a symbol of peaceful living and open spiritual prayer. 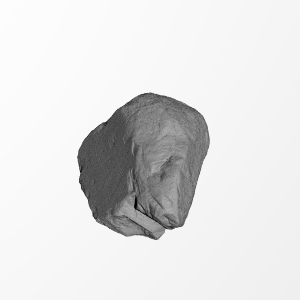 ×
2 collections where you can find Prayer Rock 通过 jerry7171