The composition of this figure, one of Houdon's most arresting nude figures, may date as early as 1781, when Houdon proposed to make pendant figures of winter and summer. A small terracotta for Winter in the Musée Fabre, Montpellier, appears to be his first essay in the subject. Winter (also called La Frileuse) is conceived as a nude woman who has pulled a shawl over head and torso, leaving her naked from the waist down. Summer wears a shift and holds a sheaf of wheat and a watering can. Marble versions of Winter and its pendant were exhibited at the Salon of 1783 Both marbles are now in the Musée Fabre. The bronze version was cast in 1787, a date inscribed on the base.

Houdon conveys a strong sense of the bitterness of winter's weather, but also gave him a golden opportunity to reveal a girl's naked charms. The revelation of the nude female body is what makes Winter so attractive in marble, bronze, and other versions - as alluring from behind as from the front.

This sculpture is part of 'Art and Material: The Sculptor's Studio' exhibited at The Musée Fabre, Montpellier. More information about the exhibition can be found here. 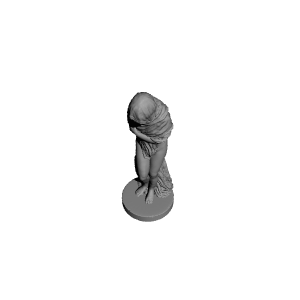 ×
3 collections where you can find Winter 通过 Scan The World