The portrait is one of a pair with the similarly-sized bust of Lucius Verus, co-emperor from AD 161 to 169. Both come from a villa belonging to Lucius Verus, in Acqua Traversa near Rome. The magnified, larger-than-life representation suggests that this was a posthumous portrait of the emperor, probably commissioned by his daughter Lucilla, the wife of Lucius Verus. The portrait was probably made sometime between the death of Marcus Aurelius in AD 180 and that of Lucilla in AD 183.

This portrait is exceptional for its size and state of preservation. It is also one of the most striking expressions of the baroque style, fashionable in the Roman empire during the late second century, and which represented a complete break with classical tradition. The exaggerated volumes of the hair and beard, deeply sculpted by the artist, contrast with the remarkable smoothness of the face; the two huge eyes, raised heavenward, give the emperor an enraptured expression. Naturalistic representation seems to have been deliberately abandoned during this period, in order to promote imperial interests by emphasizing the emperor's elevated status and character. 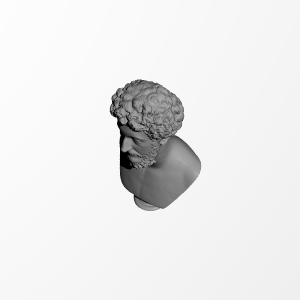 Wonderful model with an incredible level of detail. I love the way it turned out. I printed this on my Prusa i3 at 0.2mm layer height. The dimensions of this print are 9 x 7 x 14.1cm (lxwxh).