Laocoön, the son of Acoetes, is a figure in Greek and Roman mythology and the Epic Cycle. He was a Trojan priest who was attacked, with his two sons, by giant serpents sent by the gods. Though not mentioned by Homer, the story of Laocoön had been the subject of a tragedy, now lost, by Sophocles and was mentioned by other Greek writers, though the events around the attack by the serpents vary considerably. The most famous account of these is now in Virgil's Aeneid where Laocoön was a priest of Poseidon (or Neptune for the Romans), who was killed with both his sons after attempting to expose the ruse of the Trojan Horse by striking it with a spear.

Virgil gives Laocoön the famous line "Equō nē crēdite, Teucrī / Quidquid id est, timeō Danaōs et dōna ferentēs", or "Do not trust the Horse, Trojans / Whatever it is, I fear the Greeks even bearing gifts." This line is the source of the saying: "Beware of Greeks bearing gifts."

In Sophocles, however, he was a priest of Apollo, who should have been celibate but had married. The serpents killed only the two sons, leaving Laocoön himself alive to suffer. In other versions he was killed for having committed an impiety by making love with his wife in the presence of a cult image in a sanctuary, or simply making a sacrifice in the temple with his wife present. In this second group of versions, the snakes were sent by Poseidon and in the first by Poseidon and Athena, or Apollo, and the deaths were interpreted by the Trojans as proof that the horse was a sacred object. The two versions have rather different morals: Laocoön was either punished for doing wrong, or for being right.

The statue of Laocoön and His Sons (Italian:Gruppo del Laocoonte), also called the Laocoön Group, has been one of the most famous ancient sculptures ever since it was excavated in Rome in 1506 and placed on public display in the Vatican, where it remains. Exceptionally, it is very likely to be the same object as a statue praised in the highest terms by the main Roman writer on art,Pliny the Elder. The figures are near life-size and the group is a little over 2 m (6 ft 7 in) in height, showing the Trojan priest Laocoön and his sons Antiphantes and Thymbraeus being attacked by sea serpents.

The group has been "the prototypical icon of human agony" in Western art, and unlike the agony often depicted in Christian art showing thePassion of Jesus and martyrs, this suffering has no redemptive power or reward. The suffering is shown through the contorted expressions of the faces (Charles Darwin pointed out that Laocoön's bulging eyebrows are physiologically impossible), which are matched by the struggling bodies, especially that of Laocoön himself, with every part of his body straining.

The moulding shop of the Louvre was created in 1794, two years after the creation of the museum of the Louvre. Born from the will of the Lights to spread artistic and scientific knowledge, its vocation first was to provide to the museums and Art schools faithful reproductions of masterpieces of the ancient statuary. Since 1895 it is attached to the Réunion des Musées Nationaux (RMN). At present its role has widened to the general public: every one can acquire a moulding of good quality there. 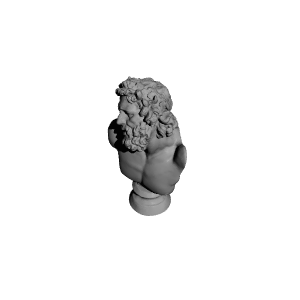 Printed with Darkstone by TreeD filaments