Marble Torso of the Diadumenos of Polykleitos

Marble Torso of the Diadumenos of Polykleitos

This superb muscular torso can be recognized as a Roman copy of Polykleitos’ Diadumenos, or fillet-binder, one of the most celebrated sculptures from antiquity. The pelvic thrust to the left and the accompanying curvatures of the lower abdomen, plus the articulation of the shoulders resulting from the arms once being raised, are all exactly matched on several more complete versions of the now-lost original (for the best preserved example see the figure from Delos, now in Athens, pl. 176 in H. Beck, P.C. Bol, and M. Bückling, Polyklet, Der Bildhauer der griechischen Klassik).

The Diadumenos is referred to by the Roman writers Lucian, Pliny, and Seneca, who praised it for its beauty and value. The original does not survive, but based on these literary descriptions, it is securely recognized in Roman copies. Where the original once stood and what precisely was depicted is not known, and the ancients are quiet on these points. Undoubtedly, Polykleitos' creation was in bronze, and would have been commissioned to celebrate an athletic victory and set up in one of the Panhellenic sanctuaries.

Polykleitos was one of the most famous and influential sculptors of the High Classical period. A native of Argos in the Peloponnesus, his artistic career flourished from circa 450-420 B.C. In addition to the Diadumenos, several other of his works are described in ancient literature and are recognized in surviving Roman copies, including the Doryphoros or Spear-Bearer, as well as his Kyniskos, identified as the Westmacott Athlete since the 19th Century. His Amazon of Ephesus was famed for having been chosen in a competition over works by the sculptors Pheidias and Kresilas, while his most magnificent creation was the colossal gold and ivory cult statue of Hera from the Heraeum of his native Argos. Pliny tells us that Polykleitos wrote about his theories of rhythm and proportion. This sculptural Canon emphasized the juxtaposition of antithetical pairs, such as right and left, straight and curved, relaxed and tensed, rest and movement. The Doryphoros is considered the embodiment of Polykleitos's canon, while the Diadumenos beautifully demonstrates the canon's "inexhaustible possibilities". 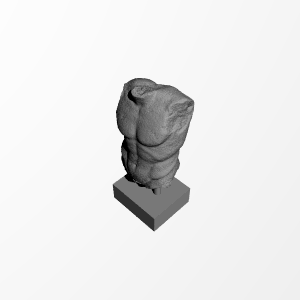