Based on a NASA data from Mars, this is a 3Dmigos original. Tough, but amazingly light, this beautiful necklace can be printed in a number of colours.

Valles Marineris (Latin for Mariner Valleys, named after the Mariner 9 Mars orbiter of 1971–72 which discovered it) is a system of canyons that runs along the Martian surface east of the Tharsis region. At more than 4,000 km (2,500 mi) long, 200 km (120 mi) wide and up to 7 km (23,000 ft) deep, the Valles Marineris rift system is one of the larger canyons of the Solar System, surpassed only by the rift valleys of Earth and (in length only) by Baltis Vallis on Venus. 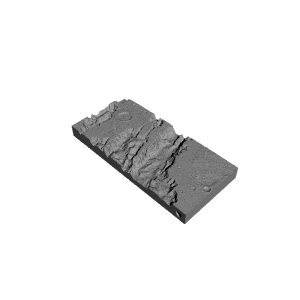