This stone statue depicts Saint John the Baptist. The work, probably part of the architecture of the building, originates from the Church of San Fermo in Verona. The sculptor is unknown, but from the style compared with other works from the region it is believed to be from the workshop of a master of Sant'Anastasia.

John the Baptist (Late 1st century BC – 28–36 AD) was a Jewish itinerant preacher in the early first century AD. John is revered as a major religious figure in Christianity, Islam, the Bahá'í Faith, and Mandaeism. He is called a prophet by all of these faiths, and is honored as a saint in many Christian traditions. Other titles for John include John the Forerunner in Eastern Christianity and "the prophet John (Yaḥyā)" in Islam. To clarify the meaning of "Baptist", he is sometimes alternatively called John the Baptizer. 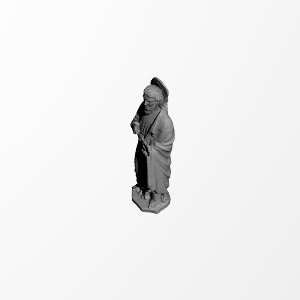