Inspired by the surrealist Italian painter Giuseppe Arcimboldo,  I bring you my addaptation of his work "Vertumnus".

First time ever 3D Printed, and the first of my Grotesque Collection. Considered a rather obscure artist before the MOMA’s 1936 exhibition, “Fantastic Art, Dada and Surrealism,” Arcimboldo was rediscovered for the international acclaim that he received as the Italian court painter for Ferdinand I at the Habsburg court in Vienna, and later, to Maximilian II and his son Rudolf II at the court in Prague.

He has become most famous for his grotesque composite portrait heads of flora and fauna that are depicted in his renowned series: The Seasons and the Elements. His bizarre compositions create an uncanny union between the scientific observation of nature and its fantastical application to the portrait bust, imbued with metaphor and fanciful metamorphosis!

Barely no support. Will Print easily in any printer. If you've got any problems, just send me a message. 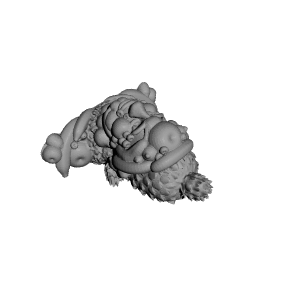