3D
Scan The World
2,851 views 96 downloads
2 collections
Community Prints Add your picture
Be the first to share a picture of this printed object
0 comments

900 North Michigan in Chicago is a skyscraper completed in 1989. At 871 feet (265 m) tall, it is currently the eighth tallest building in Chicago and the 31st tallest in the United States. It was developed by Urban Retail Properties in 1988 as an upscale sister to Water Tower Place, one block southeast, and was the second vertical mall built along the Magnificent Mile. The building features a large, upscale shopping mall called 900 North Michigan Shops. Bloomingdale's occupies the rear of its wide, six-story atrium, with other luxury shops and restaurants filling the remaining spaces. For this reason, it is commonly referred to as the "Bloomingdale's Building".[1] The mall opened with Henri Bendel as a "junior anchor". The layout of the retail area reflects lessons learned from Water Tower Place; the anchor's placement at the rear draws shoppers through the space and creates leasable space with valuable Michigan Avenue frontage, while the arrangement of escalators in parallel, rather than in zig-zags, directs foot traffic past more shops. Offices originally occupied floors 8-29, but floors 21-29 were converted to condo units in 2007, leaving offices on floors 8-20. The luxurious Four Seasons Hotel occupies the middle floors (30-46) of the tower. Floors 47-66 are part of the 132 East Delaware Residences, these 106 condominiums were part of the original building plan. A large 12-story parking garage, with retail on the ground level and a medical clinic atop, occupies the rear half of the block, facing Rush Street. The exterior of the tower is clad in limestone and green glass which reflects the light. The building has a steel skeleton on which a concrete frame was erected for the upper floors. Because the building materials changed, cranes used to work on the lower floors could not be used for the concrete portion and new cranes had to be erected to complete the building. Four lit "lanterns" atop the structure give it a distinctive skyline presence. They change colors for the Christmas season. 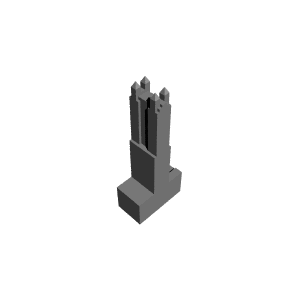 ×
2 collections where you can find 900 North Michigan Avenue in Chicago, Illinois by jkurstin22