3D
4,494 views 62 downloads
1 collection
Community Prints Add your picture
Be the first to share a picture of this printed object
0 comments

The model represents a word 'eternity' (AETERNITAS) in Ancient Latin language. It was created with application of font, designed by Anna Nazo as part of her major project of her masters in Communication design at Central Saint Martins: how can typography be represented in an alter-modernity context (Roman alphabet for Latin language project). In the project she worked with metaphorical representation of extinct language. She transcoded the medium of its initial visualisation (Roman capitals in the inscription on the base of the Trajan’s Column monument) in contemporary context; with application of contemporary technology to its production. Copyright Anna Nazo 2014.

Article about the piece. 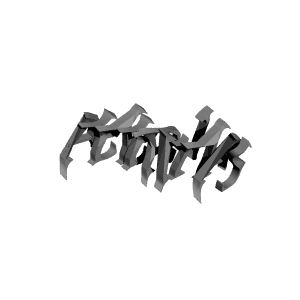 ×
1 collections where you can find AETERNITAS - Anna Nazo by annanazo