3D
Scan The World
3,093 views 157 downloads
Community Prints Add your picture
Be the first to share a picture of this printed object
0 comments

Agrippina was the great granddaughter of Emperor Augustus, the great niece and adopted granddaughter of the Emperor Tiberius, sister to Emperor Caligula, wife to Emperor Claudius and mother to Emperor Nero!
She was also known as Julia Agrippina, Agrippina Minor or Agrippina the Younger, and Julia Augusta Agrippina. Some accounts relate that she was responsible for poisoning her husband, Claudius. She had previously arranged to have Claudius adopt her son (Nero) from a previous marriage...making Nero his heir. She is known to have been ruthless and one of the most powerful women ever in Rome. This 1685 marble sculpture, located in the Tuileries Garden, depicts Agrippina as a fairly young woman...standing and wearing a toga. She holds a scroll in her left hand. Her right hand and wrist are missing. She wears a crown and looks into the distance. The piece is about 12 foot tall and is on a rectangular pedestal which is about 5 feet high. The artist is French sculptor Robert Doisy. 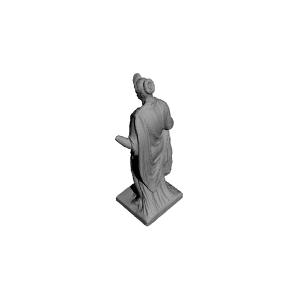 ×
0 collections where you can find Agrippine at the Jardin des Tuileries, Paris, France by Scan The World