Alexander on a chariot

3D
Scan The World
1,726 views 160 downloads
Community Prints Add your picture
Be the first to share a picture of this printed object
0 comments

Alexander on a chariot

This bas-relief became part of the academic collections with a legacy of the heirs of the Danish sculptor who, in 1844, found themselves in need of freeing his study. The relief, which represents Alexander the Great on the triumphal chariot guided by Winged Victory, reflects the last draft of the theme that Thorvaldsen created for Alessandro Torlonia in 1837, in the bas-reliefs today at Palazzo Torlonia in Borgo. The first conception of the group can be seen in the frieze with the Entrance of Alexander into Babylonmade in 1812 for the Napoleonic update of the Quirinale. The deeds of Alexander the Great were congenial to Prince Alexander Torlonia who, of the Macedonian, wore the same name. In the same years, in fact, he had commissioned the stucco reduction of the Quirinale frieze for a room in his villa on Via Nomentana. According to some scholars, the survey was used in the Academy for educational purposes. (PP) 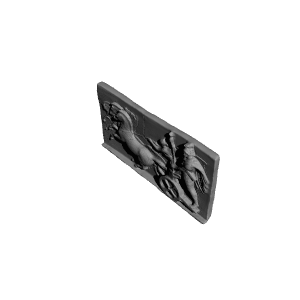