3D
Scan The World
5,644 views 284 downloads
Community Prints Add your picture
Be the first to share a picture of this printed object
0 comments

This 19th Century bust by Thomas Woolner depicts Alfred Tennyson a Poet Laureate of Great Britain and Ireland during much of Queen Victoria's reign and remains one of the most popular British poets. Tennyson excelled in penning short lyrics, such as "Break, Break, Break", "The Charge of the Light Brigade" and "Crossing the Bar". Much of his verse was based on classical mythological themes, such as Ulysses.

This lifesize bust depicts Tennyson, playing homage to his achievements. It was scanned at The Collection gallery in Lincoln. 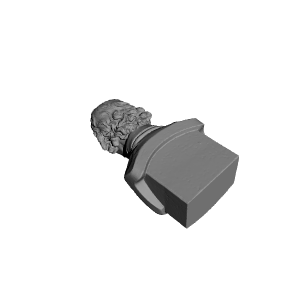 ×
0 collections where you can find Alfred Tennyson Bust at The Collection, Lincoln, UK by Threedscans