3D
Scan The World
2,482 views 267 downloads
3 collections
Community Prints Add your picture
Be the first to share a picture of this printed object
0 comments

This is one of a set of four allegorical marble figures representing the four seasons. Sculpted by Pierre Mazeline (1632-1708), Paris, Ca. 1690

Pierre Mazeline was a favoured sculptor of King Louis XIV of France and an important contributor to the garden sculpture at Versailles. The Four Seasons have been identified in an inventory of Mazeline's estate after his death in 1708 and were later acquired by Joseph-Marie Terray, the brilliant Controleur-Général of finance under Louis XV. Since they have spent their lives sheltered inside the salons of collectors, Mazeline's Four Seasons are a rare survival and in superb condition: the gardens of Versailles in miniature. 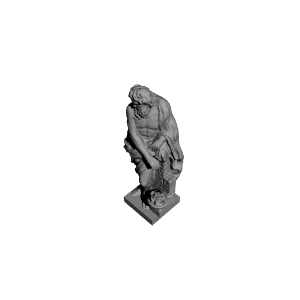