3D
360°
Featured Scan The World
10,331 views 1,990 downloads
19 collections
Community Prints Add your picture
Be the first to share a picture of this printed object
1 comments

Johan Tobias Sergel’s sculpture depicts a dramatic moment in the legend of Cupid and Psyche. We see the god of love Cupid with a woman, Psyche (the Greek word for “soul” as well as “butterfly”), kneeling at his side. He is about to leave her since she has discovered his true identity. Psyche begs him to stay with her, but Cupid is already spreading his wings. He pushes her away. The tale of Cupid and Psyche is a story of an impossible love, a fight for love and finally of love overcoming the failings of gods and mortals. It also shows how, through action, a person can determine their own fate.

Sculptor Johan Tobias Sergel (1740–1814) is one of many artists to draw inspiration from Ancient Greece. He has taken the legend of Cupid and Psyche from Roman Lucius Apuleius’ book “The Golden Ass”. The story is originally a folktale that exists in many versions across different cultures, not least Swedish with its fairytale of Prince Hat under the Ground. 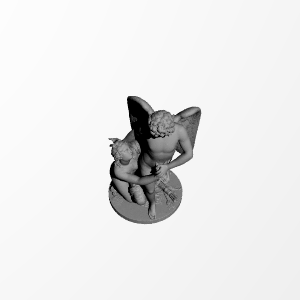 ×
19 collections where you can find Amor and Psyche by nationalmuseumswe