3D
Scan The World
3,265 views 217 downloads
1 collection
Community Prints Add your picture
Be the first to share a picture of this printed object
0 comments

In 1776 the Danish King Christian 7. introduced the nationality laws, which meant that Government posts and other public offices would usually be reserved for persons who had been born in Denmark.

The following year C.F. Stanley was appointed professor at the Royal Danish Academy of Fine Arts. The nationality laws reflected a growing awareness of national identity and history, as did Stanley’s sculpture, created the same year that he obtained Danish citizenship.

The allegorical figure is shown standing by his armour, shield, sword, and arrow, quite literally trampling another sword underfoot. In reward of deeds suggested, he bears two laurel wreaths, the symbol of honour.

An idealised patriotic citizen
The figure can, however, both be read as a symbol of patriotism and as an idealised patriotic citizen. During the 1760s Stanley spent some time in Rome where he followed discussions of the latest ideas concerning the correlation between the ideal physique and the ideal structure of society. Judging by the figure’s classical pose, heroic musculature and studied ideal proportions, the late absolute monarchy must have created a new breed of ideal subjects.

This model printed out very nicely and required supports. 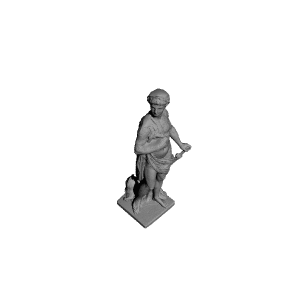 ×
1 collections where you can find Amor patriae by geoffrey.marchal