3D
Scan The World
1,144 views 38 downloads
Community Prints Add your picture
Be the first to share a picture of this printed object
0 comments

Amphion and Zethus, in Greek mythology, the twin sons of Zeus by Antiope. When children, they were left to die on Mount Cithaeron but were found and brought up by a shepherd. Amphion became a great singer and musician, Zethus a hunter and herdsman. (In Euripides’ lost Antiope the two young men debate which has more advantages, the quiet or the active life; the passage is often mentioned in ancient literature.) After rejoining their mother, they built and fortified Thebes, huge blocks of stone forming themselves into walls at the sound of Amphion’s lyre. Amphion later married Niobe and killed himself after the loss of his wife and children. 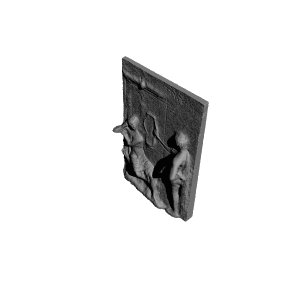