This anatomical head of italian origins, probably from Naples) dates back to the 18th century.

The practice of anatomical wax modelling originated in the Italian university centres of Florence and Bologna, with documented prototypes created by the Florentine Mannerist sculptor Lodovico Cardi 'Il Cigoli' (1559-1613) and Gaetano Zumbo (1656-1701). The 18th century saw an increase in the production and use of anatomical waxes as a means to train doctors, surgeons and midwives. Bologna and its eminent university were at the forefront of this movement, producing masters in this skill such as Ercole Lelli (1702-66) and Giovanni Manzolini (1700-55). It was their work that inspired the Florentine sculptors at La Specola, who were driven by the efforts of the surgeon Giuseppe Galletti.

With its philosophical rather than anatomical focus, the present head appears to have been intended for a vanitas context and may have been kept in a cabinet of curiosities. An analogous, though non-Italian, head is in the Wellcome Collection, London (inv. no. 240/1942). The inscription on the banner quotes the title of a seminal treatise on human anatomy by Andreas Vesalius (1514-1564), first published in 1543.

The banner inscribed: DE. HUMANIS. CORPORIS. FABRICA (on the fabric of the human body) 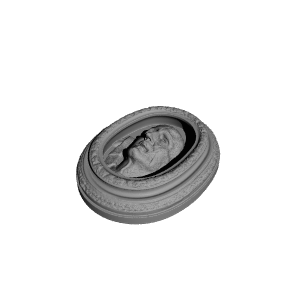 ×
1 collections where you can find Anatomical Head by Scan The World
×
Raziel S. Hakim
@RayH
1
Printed on: Prusa i3 MK2 Kit
Material: PLA
Posted at: 17th May 2021

Printed with gold colored PLA. Prusa printer was bought preassembled(not given as a choice).