3D
Scan The World
3,660 views 459 downloads
6 collections
Community Prints Add your picture
Be the first to share a picture of this printed object
0 comments

This is a sculpture depicting the mythical scene of Andromeda and the Sea Monster.

Andromeda was a princess in Greek mythology. She was the daughter of King Cepheus and Queen Cassiopeia, who ruled in the region of Aethiopia, which consisted of the Upper Nile region, along with areas south of the Sahara desert. Her mother boasted that Andromeda was more beautiful than the Nereids, daughters of Nereus and Doris, and companions of Poseidon; thus, she committed hubris and Poseidon decided to send a sea monster, Cetus, to ravage the lands of Aethiopia. After consulting an oracle, the king and queen chained Andromeda to a rock, in order to be sacrificed to the monster. However, the hero Perseus was nearby and heard of the imminent death of Andromeda; when the monster emerged from the sea, he managed to kill it, either by slaying it with a knife or by exposing it to Medusa’s head and turning it into stone. Thus, Andromeda was saved. Perseus married her and she followed him on his journey back to Greece. 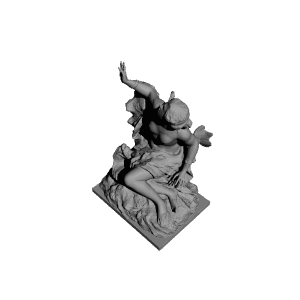