3D
Scan The World
2,135 views 49 downloads
Community Prints Add your picture
Be the first to share a picture of this printed object
0 comments

The cast bronze anthropomorphic figure was found in tumulus No. 15 of Timiryazevskiy-1 burial site. Unfortunately, a grave robbery has made it possible to define the original location of the artefact clearly. The figure could have been left in the north-eastern part of the mound at a shallow depth (about 0.2 m) during the rite or placed inside the grave, which was later destroyed by the robbers. Grave remains were located in the centre of the mound, consisting of cremated bones of an adult and a ceramic vessel. A set of fragments of two more ceramic vessels were unearthed from outside the grave, close to the south-eastern edge of the tumulus.
Who could be depicted in this anthropomorphic figure? Let’s try to answer the question by analyzing thoroughly all of its details.
The man is standing in full length, static. His arms are hanging along his body; his legs are slightly straddled and straight. Some parts of the body are displayed disproportionately, for example, the head looks overly large. The man’s eyes are wide open. Three slanting symmetrical lines are marking his cheeks from the eyes and the nose down to the lower jaw—this might be a tattoo or face painting. An oval-like figure of “lifeline” can be seen around the sternum.
Details of clothing and armament are easily discernible in the sculpture.
The man is wearing shoes with triangle-like tips. His head probably has a pointed helmet on it. Some bladed weapon used for close combat can be seen at around his waist. The blade is fastened obliquely on the front side of the body, with the handle pointing to the right-hand side. The handle has a ring on the end. The weapon allegedly hidden in a scabbard is interpreted as a backsword or a combat knife. Such blades already existed in Western Siberia in the latter half of the 1st millennium AD.
The man has two pairs of horizontal stripes on each of his arms and legs. The stripes match the anatomical location of joints only in part, which makes them be interpreted as elements of body armour.
Judging by the overall look of the anthropomorphic figure from tumulus No. 15, researchers interpret it as an image of a warrior man. His armament, tattoo or face painting and clenched fists demonstrate his military muscle.
Why was this anthropomorphic figure lying in the mound and what was its role in the funeral rite?
Ethnography of Siberian peoples shows many examples of using miniature “dolls” in most varied ritual practices. Specifically made dolls impersonated the dead relatives and served as a temporary home for one of the dead’s souls, or “life energies”. People worshipped the doll for some time, took care of it, used it in different rites and finally buried it on the cemetery or elsewhere as soon as the dead person’s soul got reincarnated.
Presumably, the bronze sculpture described above was also an image of a warrior ancestor. 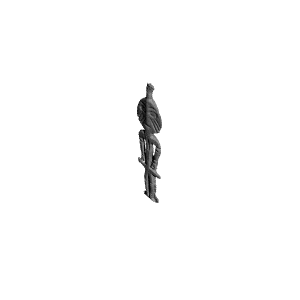 ×
0 collections where you can find Anthropomorphic sculpture by LiraArtefact