"Thanks to the generosity of Mademoiselle Jacqueline Blottin, a former student of the Ecole du Louvre passionate about Oriental Archaeology, which made ​​the Friends of the Louvre his sole heir, outstanding Iranian statue Kaluraz (North Iran) has entered the collections of the Department of Oriental Antiquities. Dated the first millennium BC, it reveals an obvious affiliation with anthropomorphic and zoomorphic statues of the Iron Age discovered by Iranian archaeologist O. Ezat Neghaban the early 1960s on the site of the necropolis Marlik not far of Kaluraz. Its three-tiered headdress rings corresponds to a collar that opens at the top of a vase mouth.It is entirely hollow; the pulp used is orange color and is lustrous surface. The statue-vase Kaluraz is a female character whose nature is unclear. It is adorned with prestigious attributes some of which have disappeared; she initially wore necklaces and earrings in the ears that were part of the two clearly visible perforations on each side of the head and it was with a majestic headdress which extends in height, and is extended at the rear by a long and careful mat, flanked by free hair strands made by incisions. Belonging to a type of representation known to a dozen copies, the statue Louvre exceeds its similar in size and exceeds the balance of its proportions." 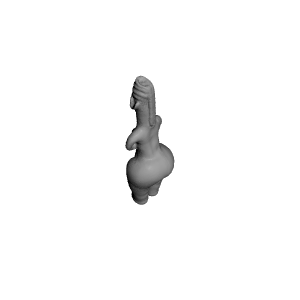 ×
4 collections where you can find Statue-vessel Northern Iran at The Louvre, Paris by Scan The World
×
Atlas 3D
@atlas3d
1
Printed on: Zortrax M200
Material: Others
Posted at: 04th December 2022

Printed in scale (76mm high) on our Zortrax M200 with "Clay" material by Treed Filaments. Applied some finishing with very fine sandpaper to give a more realistic clay appearance.