Débardeurs were men who loaded and unloaded the ships, more commonly known as dockers today. While avoiding sordid realism, Débardeur du port d'Anvers, sculpted by Meunier, became an archetypal representation of the individual's alienation through work.

This bust is a crop of an full-figure work housed at the Musée d'Orsay. The initial wax sculpture was exhiited in the 1885 Salon in Brussels, before an updated plaster was presented in the Paris Salon. The work was well received by critics:

"…never has such tragic and touching expression, such energy, oppression, suffering and resignation been put into a figure, with such intensity."

In Belgium a life-sized Débardeur was erected in the main square in Antwerp, becoming a symbol of the town. After 1893, smaller versions in bronze were produced in different sizes, as well as a bust naturally entitled Antwerp. 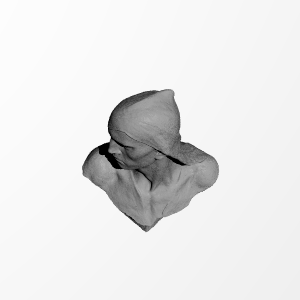 ×
8 collections where you can find Anvers (Antwerp) by nationalmuseumswe
×
Sean ONeil
@LinkLeisure
2
Posted at: 28th January 2021

Thank you for the scan .