3D
Scan The World
3,087 views 330 downloads
2 collections
Community Prints Add your picture
Be the first to share a picture of this printed object
0 comments

Venus of Capua is statuary type representing a semi-naked Aphrodite.

Its prototype, named after its findspot at the ruins of an ancient theater in Capua, Italy, is now in the Museo Archeologico Nazionale Napoli (Naples National Archaeological Museum). An earlier version of the type of the Venus de Milo, and close to the Venus of Arles, the statue probably represented the goddess admiring her reflection inside the reflective inner surface of Ares' shield, a motif known on coins from Corinth. 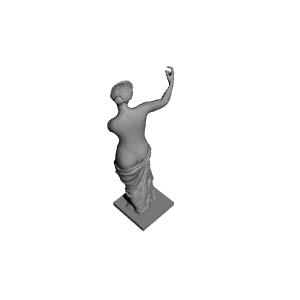