3D
360°
Featured Scan The World
4,347 views 659 downloads
6 collections
Community Prints Add your picture
Be the first to share a picture of this printed object
0 comments

This is a plaster cast of a marble sculpture originally part of the Capitoline Museums' Apollo, a fine example of quality sculpture.

There are several theories as to who created the original sculpture from which the marble copy was made. Many attribute the original to Calamis, a Greek sculptor active in the middle of the fifth century BC.

Others believe the original was made by Onatas, another fifth century sculptor. It is also possible that the first sculpture had no connection to the myth of the omphalos and indeed some scholars interpret the surviving copies as representations of Apollo Alexikakos. The god was worshiped in this form by the Athenians following their salvation of their city from the plague c. 430-427 BC.

This statue of a Roman replica of the Apollo of Omphalos (named by its find-spot in such close proximity to the Omphalos). The original statue is no longer extant, but over twenty copies are known to exist, recognizable as such by their close resemblance to each other. The name Apollo of Omphalos was derived from one such copy housed in the Museum of Athens. This famous replica has survived to the modern day largest intact and has preserved an omphalos.

According to mythology, the omphalos was a net-covered rock that was used to mark the centre of the world. One of these stones was kept at Delphi and it is that stone that has supposedly been preserved in this replica.

The weight of the Apollo rests upon the right leg. The left is slightly withdrawn and held away from the body. The slight outward projection of the right hip is balanced by the outward movement of the arms.

The figure's head is tilted to the right, displayed the god's long, oval-shaped face. The god's large, deeply set eyes and soft, full lips dominated his face. His head is crowned by a mass of hair arranged in this, orderly locks that fall onto his forehead. A thin double-braid of hair runs around his head.

The figure's hair and other aesthetic features are typical of the severe style popular during the fifth century BC.

This replica dates to the beginning of the Imperial Period. 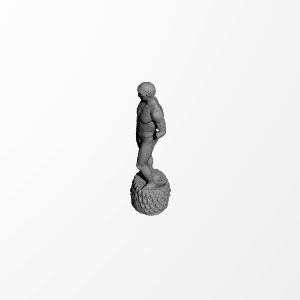