3D
34,158 views 6,217 downloads
28 collections
Community Prints Add your picture
Be the first to share a picture of this printed object
2 comments

Princess Ariel is a fictional character and the title character of Walt Disney Pictures' 28th animated film The Little Mermaid (1989). She subsequently appears in the film's prequel television series, direct-to-video sequel The Little Mermaid II: Return to the Sea (where her daughter, Melody, takes over as the lead character, while Ariel is a secondary character instead) and direct-to-video prequel The Little Mermaid: Ariel's Beginning. Ariel is voiced by Jodi Benson in all official animated appearances and merchandise. She is fourth in the Disney Princess lineup, and the only princess to become a mother to her own child. 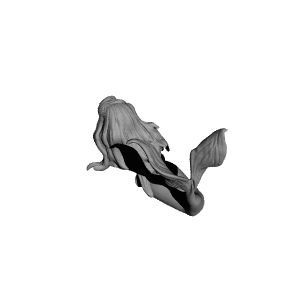