3D
2,923 views 104 downloads
2 collections
Community Prints Add your picture
Be the first to share a picture of this printed object
0 comments

The Aristarchus Plateau has fascinated lunar observers since before the space age. Its odd shape and low and high reflectance extremes immediately draws your attention. Superimposed on the plateau is a spectacular channel (or rille), and the very young Aristarchus Crater (regional overview). Aristarchus Crater is the largest impact on the plateau and is one of the highest reflectance (blindingly bright in a telescope) features on the moon. The plateau itself is surrounded by the lava flows of Oceanus Procellarum, and the whole region has a high concentration of sinuous rilles. The largest of these is Vallis Schroeteri, which is also the largest sinuous rille on the moon. Finally, the plateau is almost completely covered by one of the largest lunar regional pyroclastic deposits. Thus, due to its geologic complexity and resource potential, the Aristarchus region is naturally of interest to the Constellation Program and future lunar missions. This model is rendered with a 3x vertical exaggeration. 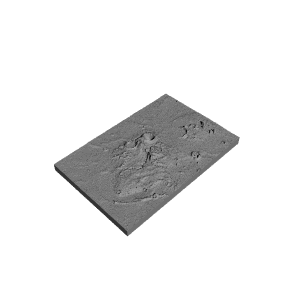 ×
2 collections where you can find Aristarchus Region by NASA